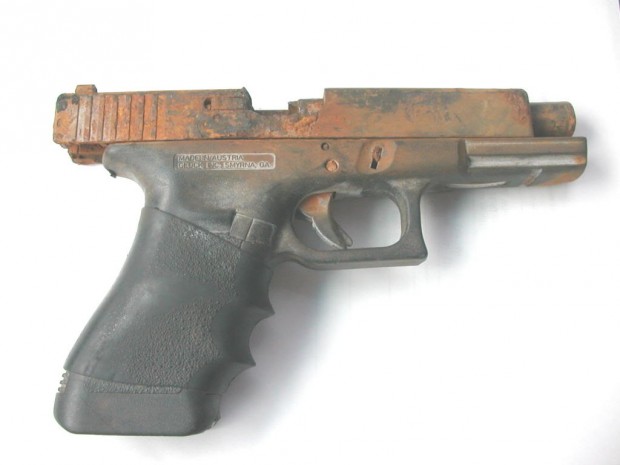 I get bemused by people with incredibly firm, often fanatical opinions about their choice in a defensive handgun. As in, “this is the ultimate weapon!” Or worse, “that model (or caliber) will get you killed!”

Hey, I’m a 1911 guy at heart, but I also own Glock, M&P, Beretta, and HK. I like revolvers. There are advantages and disadvantages to all of them. Some, like my Walthers, Winchesters, and Colts, I collect as mainly as a hobby.

With braggart gun owners it’s often more of an emotional stance, trying to justify a critical choice or validate hard earned money spent. Sometimes it is just limited experience. Sometimes it’s to make themselves feel more confident and secure in what is their primary defensive weapon. Men in particular get, well, “gun-envy” so they have to build up as all but greased blue steel perfection the gun on their hip.

Just understand. All guns fail if not operated and maintained properly and fed the correct ammunition. All guns are just mechanisms made by fallible people. Some are truly better designs than others, but no gun is immune to failure. Military testing proves this. Hell, over the years I’ve spent a smallish fortune on some guns that, well, to be a bit crass… Sucked.

Gun companies have made fortunes off this issue. Their advertising takes advantage of your emotional instinct to have the best, or better than the other guy. Think Ford, Chevy, and Dodge. Apple vs. Android. It’s not unique to guns.

Manufacturers have only recently begun marketing directly to the maternal protective instinct in women; the fastest growing market of new firearms consumers. That’s not “bad” per se, as it draws more people into the shooting fraternity (sorority?).  Just as long as you recognize it for what it is. An ad campaign designed to impact your first purchase emotionally or get you to switch.

From my years of talking to shooters I can testify that gun owners are very often emotionally attached to what they first learn to use successfully. That’s why a marketing person tries to influence your first purchase with a specific brand. It takes perceived success with another product before we’ll change, if then. Right or wrong, I’ve known old timers who wouldn’t swap out whatever their old gun was for all the new ones in the world.

“I can hit whatever I can see,” said one old friend who was on the far side of 75 years, although he probably couldn’t see too far. He carried a 6″ Smith and Wesson Model 17, .22 long rifle in a western type hip holster every day and only left it in the truck when in town. “I’ve killed rabbits to wild hogs with it. I’ve used it to drill holes in boards when I was too far off for another option and I’ve even used it to punch through leather to repair tack.”

I don’t advocate some of that as safe, but I can speak to his ability first hand. He never seemed to be able to miss with that Smith.

Now, logically you wouldn’t care what tool you used if it worked, and would quickly switch to a proven better tool when it was available. Logically. 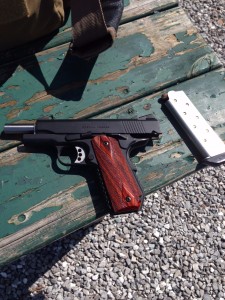 But cowboys only begrudgingly dropped their Colts and Remington single actions when good double actions became widely available. American cops now carry semi-autos almost universally having only abandoned their revolvers mostly by department mandate. Both of these examples took years longer than the technology proved it should have. A lack of reliability or more truthfully a perceived lack of reliability was the issue that slowed these inevitable changes. It was a matter of earning emotional trust.

I’m not advocating change for change’s sake. Far from it. If what you have works and you can hit with it- stick with it. If you decide on a handgun it should be because you are accurate and comfortable with it. If you decide to change your primary defensive handgun, do so for logical and practical reasons, and not advertising or peer pressure.

There are no perfect handguns. They all break. That said, don’t try to talk me out of my 1911.

And whatever you do, Do Not try to talk my friend out of his old  Smith .22.