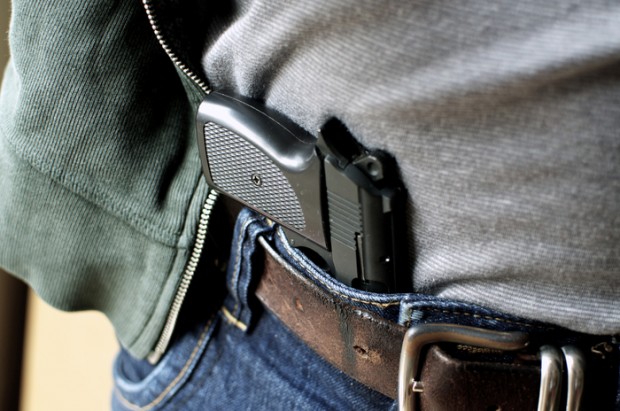 Carrying a concealed firearm for person defense is a serious decision requiring a good deal of confidence in your personal abilities. It is a responsibility not only under the law but to yourself and those you would protect. It can permanently change how you dress, how you interact with others, and the standards for your behavior and decision making.

Regardless of your personal reasons for deciding to carry a firearm you will want to trust that it is a reliable and accurate weapon and that you know what your abilities are to safely and effectively defend yourself with it.

This document is not a substitute for professional training nor is it an attempt to meet state laws regarding CCW training. It is simply some tips gathered from several subject matter experts to assist in your training and safety.

Concealment
The laws for Concealed Carry, often referred to as CCW, may differ from state to state but all agree on one critical matter. The firearm must be concealed. Generally the ability to adequately conceal a firearm is based on four factors: your body size/type, the size/type of the firearm, the type/construction of the holster, and the concealing garment(s).

a) Your body type and your size can dictate what you are able to conceal. A short-waisted and petit person would not likely properly hide a full sixed 1911 handgun, whereas a long torso tall person may be able to pull it off. If you’re smaller, look for holsters and concealing garments that allow you to wear a handgun high and slightly behind your strong side hip –or inside the pants. Larger framed or heavy persons may be able to wear a weapon at the hip level, but have a problem with inside the pants wear. Try several different holsters and concealing garments. Remember, the goal of a firearms carried under your CCW permit is to be comforting, not necessarily comfortable. If too uncomfortable however, that firearm you need may be left at home or in the car!

b) The size and type of firearm go to your abilities to shoot accurately and just fast enough. You want a firearm that is accurate with enough power to do the job. Too powerful and it may be “too much gun” for effective defensive purposes. Larger weapons are the most challenging to conceal and require the greatest adaptation of your clothing, movement, and lifestyle. Small, pocket-sized weapons may be easy to carry, but more difficult to draw and shoot accurately. 25 ACP and 32 ACP weapons carry easily but are considered marginal for stopping an aggressor, while 9mm and 40 S&W fare much better in power but are larger and heavier. Choose first what you can shoot accurately, conceal effectively, and alters your lifestyle and movement the least. A complete alteration of how you dress, move, and act to suit a particular weapon requires a great deal of dedication and serious training. Whether that is worth the changes is up to you.

c) Whichever size weapon you choose, you will need a holster. Holster type and construction is a Master’s degree discussion with strong opinions on many sides of the issue. Generally speaking a strong side hip holster that holds the weapon securely and affords a proper grip while the gun is in the holster is preferred. Holsters are made of Nylon, Kydex (a hard plastic like material) and leather. Leather has a traditional look and feel, and is ideal for a belt holster. Kydex is popular for its rigidity and retention. Nylon offers the most flexibility, and is an ideal material for holsters that fit inside pockets. The key is security. A holster should hold a gun securely, but not so tightly that it can’t be draw quickly. The balance can be difficult to achieve, but your life may depend on it. So don’t settle on just any holster.

d) Whereas in colder climates or season jackets and coats offer easier concealment; summer months and higher temps challenge concealment tactics. Wear shirts designed to be untucked or pants a little large to allow an inside the waistband holster. If wearing a belt holster, ensure you have a high quality belt that is designed to carry the weight and balance of a holstered gun. Dress belts or regular clothing belts are insufficient and lead to a common CCW giveaway called ‘tugging’. This is where a person concealing a weapon often pulls up the pants or has to grip the holstered gun and shift their pants up under their shirt due to too weak/thin a belt or a too heavy weapon.

The main giveaway in concealing a weapon is behavior. Avoid touching or ‘checking’ your concealed weapon. Avoid holding one arm against the concealed weapon while the other moves naturally. You can have a friend or family member look at you to determine if the weapon is visible through your concealing garment or if it presses against the clothing in such as a way as to reveal its outline (called ‘printing’).

Most CCW states have provisions against Brandishing or similar language. Not properly concealing your weapon may lead to a suspension of your permit. Check your local state laws.

The choice of a good CCW firearm is ultimately a personal concern and based on your abilities. Some people prefer the simplicity of a good revolver, but the thickness of even a .38 caliber can make it harder to conceal. Semiautomatics are often easier to hide on your body but may require a bit more training and familiarity depending on the exact make and model.

Most firearms easy to conceal will be smaller with shorter barrels and lighter weights. While easy to conceal they will not be as accurate, probably have very minimal sights, and if too light may be hard to control more than for the first shot. This can create a good deal of concern unless your target is very close or you train a great deal.

Firearms that are a bit larger with longer barrels will be more versatile, easier to shoot effectively, and more accurate. They will have better sights, generally better trigger pulls, and with the right gear still be concealable. Weight and size of the weapon become the factor here, so your decisions as to belt, holster, and concealing garments are more critical. The key factor to concealing a larger firearm is not barrel length, but the length and thickness of the grip or butt. Long, squared off firearm grips print easily when you are moving or bent over.

State Gun Laws
State gun laws vary considerably. Some states have many more firearms restrictions than others. Some gun owners who visit other states will be granted reciprocity and recognition for any “right to carry” gun laws they had in their home state. Not all states grant such rights. “Right to carry” laws are federal and state constitution provisions that recognize a gun owner’s right to use her or his gun for defensive purposes.
Some states give gun owners more rights than others do. For example, twelve states currently prohibit employers from firing employees who leave guns locked in their personal vehicles on company property. That means 38 other states do allow companies to restrict employees from having weapons in their cars or trucks on company property.

If you just moved to a state with an open carry law, there is often a waiting period before you can apply for an open carry permit. Open carry restrictions are often the subject of lawsuits filed by gun owners against states where they reside.
Go to Findlaw’s site (http://statelaws.findlaw.com/criminal-laws/gun-control/ ) for a directory of gun laws in all 50 states and the District of Columbia. If you have additional questions, be sure to contact a gun rights attorney near you.

Training
The key to successful carry and effective use of a firearm is training and of course, practice. Find a professional firearms instructor and check their references before investing in a training course. Reputable trainers should have a website or brochure that describes their training and background to teach. The NRA is a good place to start. Talk with your local law enforcement agencies. Many of the trainers who train them will train cleared civilians as well.

Look for trainers with a broad range of shooting/training experience. For instance a trainer who has just a police training background may not be as good a choice for civilians. A pure competition shooter may not give the best use of force advice. Military specialist may not be up on state law.

Train to the threat you are likely to encounter. To give you an idea:

You need to know your abilities and benchmark yourself against known standards.

Shooting Ranges
If you visit a Shooting Range make sure you read and familiarize
with its rules to ensure a safe environment to you and those around you.
Remember that each shooting range is different.

Gun Laws
Gun laws vary from State to State, so, familiarize not only with the laws
from your state but also with the laws of the state you are visiting or
passing through, especially if you are traveling or driving with a gun in
your possession.