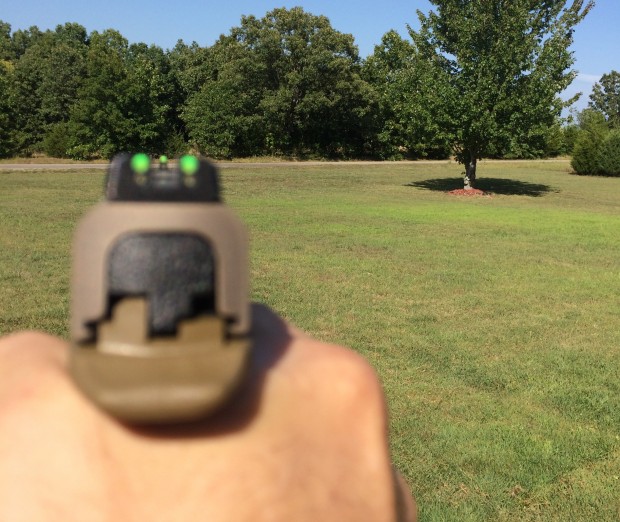 "On Your Guard", Concealed Carry Training 4

I have known people who due to, shall we say austere circumstances, jerked the trigger, were out of breath and panting hard, and had less than optimal stance or were off balance … but still effectively hit their target.

Note that I didn’t say they made a precise shot, I’m saying they effectively put rounds on target.

What they did have was a repetitively trained – and probably subliminal – focus on their front sight.

They got away with not having all of those other fundamentals in place because they had trained properly, repetitively, and realistically for years.

Thousands of rounds of ammunition, years of training- all dedicated so that when things are less than optimal their conditioned response will be to unconsciously prioritize their reactions, work their muscles, and focus their mind. All synchronized to operate on whatever it takes to survive the worst seconds of their life.

More often than not, by a factor of a thousand over other basic skills, that means front sight focus. It is the principal factor in decisively hitting a target. And more importantly, stopping a deadly threat.

I certainly don’t mean to degrade the other fundamentals of good marksmanship, particularly trigger control which is a very, very close second. You must practice all of them until they are, no kidding, second nature. 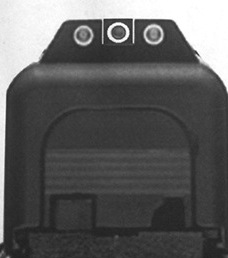 But when things go wrong and you have to pick one thing to go right, pick out that front sight and stare at it throughout the shot, recoil, and reset. If you cannot discern what your sights are pointing at you won’t hit anything you want (need) to, and you could actually be more of a threat to yourself and other friendlies than the opposition.

Now if you can do two things right, well sure, do front sight focus AND good trigger control. But the “Best Trigger Press of The Year” is like hitting a golf ball blindfolded. You are literally launching an UNguided missile.

And that’s a Rule 2, technically a Rule 3, and definitely a Rule 4 violation.

So, how do we train Front Sight Focus? Here is a dry fire then a live fire drill:

1. Dry Fire (see safe dry fire directions elsewhere on this site): With a safe and clear weapon, post a target up and look at it as if noticing the threat for the first time. Do a correct but quarter speed step, drawstroke, and presentation of your weapon. You can use Blueguns or Airsoft for this as long as they have a good front sight. At about point three headed to four of the Four Point Draw (again, see directions elsewhere on this site) or about when your support hand grasps the weapon, you should see the front sight in your peripheral vision.

Bringing the weapon into your workspace and extending forward, shift your focus to the front sight alone and place it on the target where you want to hit. If your grip and stance are solid the rear sights will rock up behind the front sight, centered and square. The rear sights should not come up first and block your view of the front sight.

For ten yards and under (approximately) look THROUGH the rear sight AT the front sight and concentrate on it. For more distant targets you must think and align all the sights properly. But close, fast work? Think Front Sight!

Repeat this drill at 1/4 speed over several separate dry fire sessions about ten hundred thousand times. Then at half speed for another forty dozen hundred.

2. Live Fire: Put a smallish dot on a target and back off to, say, 7-10 yards and do dry fire as above. Then load up but fire one shot at a time slowly, focusing on the front sight. As you draw and get from position one to two to three, actually say, “front sight” out loud when you see it and then watch it and drive it to the target spot.

Saying “front sight” out loud helps focus your attention. Seriously, don’t just think it, shout it! This is a technique top instructors have used for years and believe me, it works. It clears your mind of extraneous thoughts and distracting images. It reminds you to watch the sight.

Now, if during your slow, correct, range practice you actually see a shot hit the paper, well uh-oh, you were NOT watching the front sight when the shot broke, now were you?

It’s a common issue. If you notice your shots sometimes hit low, but you’re sure your grip is correct, likely you are subconsciously shifting your focus from the front sight to the target and thereby looking OVER your sights in order to see where the shot hits. By looking over the sights at your target you are thusly LOWERING your weapon ever so slightly to see over it. Remember, what your sights are covering as the bullet passes them is where the bullet will hit. This is why, often completely unintentionally, people hit low.

So say, “front sight” out loud to make your brain obey. Practice staring at the front sight through the entire cycle, including the follow through and reset, and holding that focus until you say “recover” out loud.

It sounds like, “Front sight,” BANG, “recover.” Do this until it gets dark out.

After many rounds fired correctly you’ll see positive results and then you’ll begin self-correcting. Good, you are improving. When you think you can, drop the verbalization or change it to, “Stop!” which is not a bad habit to develop legally anyway.

Go back and slow down every now and then and re-practice Front Sight focus. Have a bad range day? Check yourself and remember to stare at that little bumpy thing on the nose of your gun.

Oh, and try to work a good trigger press in there too. But that’s another article.